Policyholders can gain peace of mind by seeing exactly which perils are covered by their P&C insurance.

It’s up to the insurer to outline these perils in clear details so that the insured can easily understand their coverage. Homeowners may worry about hurricanes, fires, or losing electricity, and these fears are among the main motivations for gaining coverage.

What is a Peril?

A peril is an unexpected event causing property damage or loss, whether through a natural or man made event. Protection against perils are often offered in two ways:

All Perils or Open Perils Coverage – the insurer allows coverage on all perils that are not individually excluded.

Perils to Highlight in P&C Offerings

Named perils coverage indicates a list of perils that are included within a policy. There are a total of 16 commonly named perils for homeowners insurance:

Named perils coverage is very specific to perils listed in the policy details. This allows carriers to offer less expensive coverage options by excluding all events not listed. This list also gives policyholders an easy reference on what to expect from their coverage and allows them to seek out further coverage as needed. When placing a claim, carriers can hold the policyholder to proving their claim is based on a named peril.

Transitioning to Rate by Peril 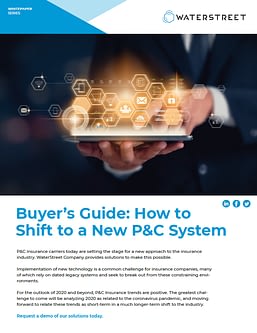 Many insurers are shifting towards a rate by peril system in order to offer more granular and relevant policies.

One study found 65% of carriers that had not yet offered rating by peril would begin by 2017. ISO has determined 20 building characters that influence rating by peril, such as having a pool in the yard or the roof being a certain age.

WaterStreet Company connects to third-party integrations that help inform the rate by peril process, offering policy administrators and underwriters more information to weigh the risk of insuring property against peril damage. Rating by peril can help save the insured save as well.

Here are the key benefits to rating by peril:

WaterStreet Company offers insurers a unified system for managing the full policy lifecycle. With document management at its core, gain complete control over a history of records with policyholders and automatically generate documents as new policyholders are gained.

Reach out to WaterStreet Company today to request a consultation and demo of our solutions.